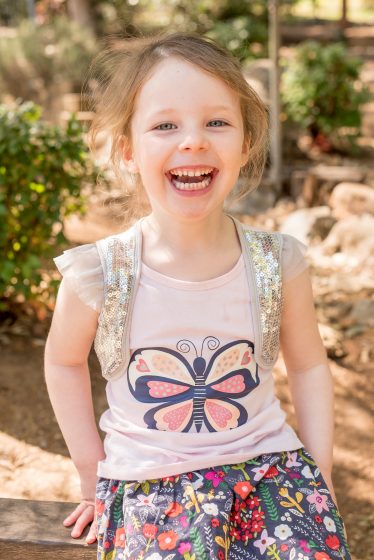 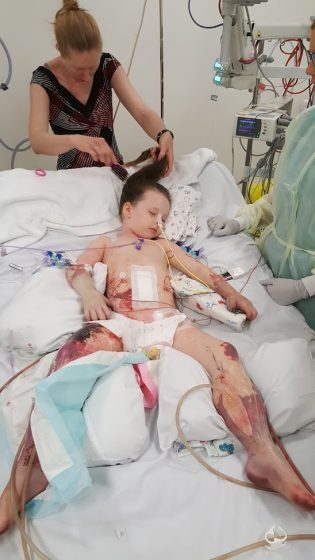 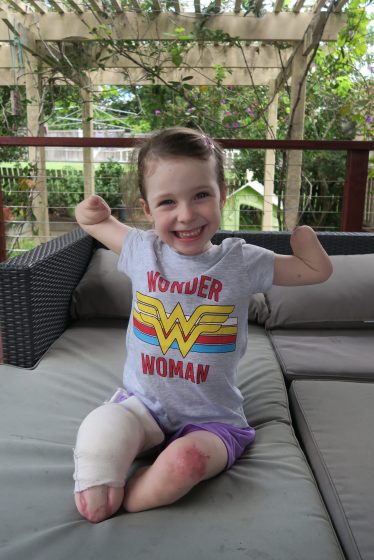 In 2017, our beautiful Mia was a typical four-year-old-girl attending Kindy.  She loved swimming and gymnastics and was very proud of herself for having just mastered riding a bike.  In October 2017 our lovely girl suddenly went from perfectly happy, active, cheeky and healthy to critically ill, in intensive care and on life support.  She was suffering from Sepsis, her body’s immune response to Influenza A, Influenza B, Respiratory Syncytial Virus and an invasive Streptococcal A bacterial infection.  Amazingly she survived, however as a result of the illness she has become a quad amputee, having her arms amputated below her elbows and her legs amputated below her knees.

On Friday 13 October 2017 Mia had enjoyed a busy, fun morning playing with her cousins and everything seemed fine until the afternoon when she told us she had a sore belly and wanted a cuddle.  At around dinner time she vomited.  We cleaned her up and took her to bed hoping that a good night’s sleep would have her feeling better.  She was sicker than we’d ever seen her so on Saturday morning we took her to a GP.  She was diagnosed with a gastro bug.

By Saturday afternoon Mia seemed incoherent and disorientated.  Although her eyes were open, she wasn’t responding to our questions and was unable to focus on us.  This was very scary so we took her straight to the hospital emergency department.  By the time we got there Mia was complaining about severe pain stopping her from putting weight on her legs.  She was diagnosed with Influenza B and Viral Myositis and sent home to rest.

On Saturday evening we were still worried, and after carrying her to the toilet we were particularly concerned by how much pain Mia had in her legs.  We called the hospital again hoping to speak to the doctors who had seen her, however we were transferred to an over-the phone medical service.  After talking to the nurse, we were still worried but Mia hadn’t shown any new symptoms since her hospital visit.  We checked on Mia every two hours that night, prodding her a little to verify she was still responsive with a plan that if we saw any sign of the incoherence or new symptoms we would take her back to hospital.

On Sunday morning, Mia didn’t seem any better, but she didn’t seem any worse either.  We concluded that with the ’flu, Mia just needed rest so we set her up in front of the TV for a lazy day.  We would go to check on her often and ask: “How are you doing Mia?” and each time she would respond: “I’m ok.”

On life support in intensive care

When we checked on Mia late Sunday afternoon we noticed a light purple rash on her legs.  When we saw this, our confidence that this was a normal ’flu disappeared and we immediately took Mia back to hospital.  We had no idea how bad things really were until we arrived at the hospital.  Our hearts dropped when Mia was quickly admitted and surrounded by medical staff.  We’ll never forget that scene.  Mia was on a bed in the middle of the room surrounded by doctors, nurses and equipment.  The doctor told us they had done all they could in the emergency department and Mia was being transferred to the pediatric intensive care unit (PICU).

Another squad of doctors and nurses was waiting for us when we arrived at PICU.  They set to work adding more IV lines and setting up monitoring for Mia’s vital signs.  They were having difficulties getting the IVs in because Mia’s blood pressure was so low.  We found ourselves trying to hold Mia still while the nurses tried and failed to get a needle into the veins in her hands.  Mia hated it.  It haunts us that the last time Mia could feel us touch her hands was when we were holding them down trying to help the people trying to save her.  Eventually they gave up and put her to sleep so they could put the additional IV lines into the femoral vein in her leg.

Mia was soon having trouble breathing and the decision was made to put a tube down her throat to help her.  During the procedure, Mia’s heart stopped.  Doctors rushed in to perform CPR to revive her.  We held each other and cried as we watched on helplessly as they worked on Mia to save her life.  The relief when they said they had a heartbeat was profound.

When morning came Mia was still alive, but we noticed that her hands and feet were becoming dark.  A doctor explained that Mia’s blood pressure was critically low.  To combat this, she was on a combination of drugs that constrict her blood vessels.  This kept her blood pressure high enough to support her brain and vital organs but greatly diminished the flow of blood to her arms and legs.  Once Mia’s condition stabilised they could reduce the drugs and hopefully her hands and feet would recover.

Regular blood tests showed indications that Mia’s kidneys were failing so she was hooked up to a dialysis machine.  The doctors also cut open both sides of her calves to stop the pressure from swelling.  The IV line into her femoral vein developed a clot which caused massive swelling in her right leg so the doctors cut open her right thigh to relieve the pressure there as well.  Mia’s hands and feet continued to darken but her vital signs remained too poor to consider reducing the drugs that were keeping her alive.

While Mia was in PICU there was always a family member by her side.  A music therapist came and sang some songs for Mia.  We read her books and brushed her hair.

On the second or third day, a nurse pointed to the display on the machine that was doing Mia’s breathing.  Once every minute or so a little picture of lungs would flash up.  The nurse explained that this happened whenever Mia attempted to breathe on her own.  We can’t describe the relief at seeing that icon as we began to believe that Mia would come through.

With Mia finally improving, the dosage of drugs constricting her blood vessels was reduced.  Blood thinners were introduced to dissolve the clots that had formed.  The colour in Mia’s hands and feet immediately improved and we hoped that she may just lose the tips of her fingers and toes.

That hope faded as we watched a dark black colour slowly creep up her fingers and toes.  As the days went on her fingers and toes began to dry and shrivel up.  We also began to worry about the damage we couldn’t see.  Would Mia’s kidneys, lungs, heart and liver fully recover?  And, could there be damage to Mia’s brain.  Would it be Mia who woke up after all of this?

Survival and the start of recovery

Our brave little Mia showed us her courage, fighting spirit and will to live.  On 21 October, after six days on life support, her lungs had recovered enough.  Mia started breathing on her own and she was woken.  Mia was able to talk a little bit.  We felt she was still our beautiful Mia.  Mia survived, but this was just the beginning of a very, very long journey.  We had so much hope that she wouldn’t lose too much of her hands and feet.  All we could do was be with her, be her advocates, surround her with family and love her.

On 25 October Mia was deemed well enough to be moved out of PICU and to a ward.  It was very scary leaving the security of a nurse at Mia’s bedside at all times but it also meant Mia was getting better.

As time went on, it was obvious that a lot of damage had been done to Mia’s hands and feet.  More of her hands and feet began to blacken, shrivel and die.  A bone scan was taken on 31 October, looking for signs of infection causing Mia’s high temperatures.  This scan also very clearly showed that there was no blood circulating past Mia’s mid-forearm and mid-calf.  To see such definite cut off points on the scan images was devastating.  The scans confirmed our little girl would lose so much!  On 10 November 2017, Mia had her arms amputated below elbow and, on 3 January 2018, Mia had her legs amputated below the knee.

Looking to the future as an inspirational quad amputee

Mia’s arms have healed well, and she amazes everyone with her resilience and ability to adapt.  Her strength and general health have returned and she started Prep at school in 2018!  She is now in Grade 1 and doing really well, surrounded by wonderful friends and teachers.  Mia is learning to write with her arms, she is very efficient on her iPad, she can feed herself, she is an awesome power wheelchair driver and she is extremely mobile crawling around the house on her elbows and knees.  Nothing will hold her back!

Thankfully Mia’s beautiful, cheeky, caring, bubbly, inviting personality is alive and well.  She has shown such, strength, bravery, adaptability and patience.  Mia is such a joy to be with and she charms everyone she meets.  She never complains or asks why this has happened to her.  She tells us daily she loves us which is the greatest gift in the world.  Her giggle is infectious! She inspires us every day to focus on the positives, have a can-do attitude and enjoy life.

She began the process of arm prosthetics in June 2018. She is finding them tricky to use but loves being able to hold a brush so she can brush our hair.

Her right knee, where her skin was affected most, took a long time to heal and required skin graft surgery.  Finally, on a happy day at the end of July 2018, Mia was able to start wearing training legs and began the process of learning to walk all over again.  It has been amazing to see her determination.  One day she will walk, run, skip, play and swim just like other children.

The last year and 9 months have been filled with so much heartbreak and challenges but also so many inspirational achievements.  We invite you to join us on Mia’s journey.  We are so proud of our little girl and love her to the moon and back.

Join us on Mia’s blog journey